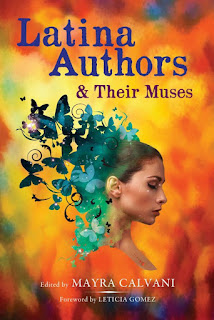 As the Hispanic American population of the U.S. increases, with influences ranging from Mexico to Central America and the Caribbean, so does interest in literature inspired by those cultures. Celebrate Hispanic Heritage Month by delving into Latina Authors and Their Muses.

Award-winning author Mayra Calvani has now edited a collection of interviews with 40 Latina authors living in the U.S. and writing in English. Latina Authors and Their Muses is an inspirational and informative book focusing on the craft of writing and the business of publishing, one that provides aspiring writers with the nuts and bolts of the business.

Cover Reveal: The One Who Sees Me, by Kandi J. Wyatt

Looking for a new read?
It's cover reveal time!
Booktrope Publishing brings you the latest in Historical Christian Fiction...
THE ONE WHO SEES ME

SYNOPSIS
Teenage slave girl Faru’s life has been turned upside down when she discovers she’s been traded to a new master, forcing her to leave all she‘s ever known. Upon her arrival, Faru meets a friend, Cailean, who helps her adjust to life in the strange location. Life settles into a new pattern, and romance blossoms between the young friends. But as soon as they plan to get married, another proposal comes about – one that cannot be ignored. Being a slave means not always marrying who you love.
On a daring journey to heal her heart, Faru encounters the Existing One. Will she trust Him and do His bidding even if what He requests is so hard?
Follow Faru’s tale in author Kandi J Wyatt’s retelling of a Biblical story found in the Old Testament book of Genesis, showing that when things don’t make sense, God will guide the way.
PRE-ORDER NOW (click here)
Author Bio & Social Media Links for The One Who Sees Me
Author Bio:
Kandi J Wyatt is a wife, mother of five, teacher, artist, and author. In her free time, she enjoys writing fantasy stories and Christmas programs, and drawing with graphite and colored pencils. Portraits are her specialty. Kandi also enjoys photography, thanks to her photographer husband who has let her join his journey as both his model and apprentice, and she occasionally serves as his assistant when he needs a “light stand with feet.” To learn more, visit Kandijwyatt.wordpress.com.
Blog:  https://kandijwyatt.wordpress.com/
Facebook:  https://www.facebook.com/pages/Kandi-Wyatt-author/647179792053374
Twitter:  https://twitter.com/kandijwyatt
Pinterest:  https://www.pinterest.com/kandiwyatt3/
Instagram:  https://instagram.com/kandijwyatt/
Google +: https://plus.google.com/u/0/+KandiWyatt
Goodreads:  https://www.goodreads.com/author/show/13817774.Kandi_J_Wyatt
Amazon Author Page: http://www.amazon.com/Kandi-J.-Wyatt/e/B00ZTC4T10/ref=ntt_dp_epwbk_0
Posted at 11:19 AM No comments: 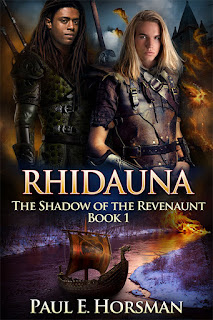 The night before his Coming-of-Age, Ghyll and his two friends escape their castle on a clandestine boar hunt that will forever change their lives. The hunt proves a disaster, and with one of them badly wounded, they return just in time to see their island castle destroyed by macabre warriors from a dragon boat, and by flocks of fire-breathing birds. Ghyll’s eighteenth birthday turns into a nightmare as they flee into the night.
Now begins an epic journey to find out who is trying to kill them – and most importantly, why?
Fortunately, they can count on the help of new friends, including a sometimes overly enthusiastic fire mage, an inexperienced paladin and a young beastmistress who is also a ferocious mountain lioness. It soon becomes clear that not one but several sorcerers want to kill them. Are those blackrobes really followers of a terrible, long-forgotten organization?
PURCHASE
Amazon
Barnes & Noble
Kobo
Google
Smashwords
iTunes
The Author
Paul’s  Website / Twitter / Facebook / Goodreads
Paul E. Horsman (1952) is a Dutch and International Fantasy Author. Born in the sleepy garden village of Bussum, The Netherlands, he now lives in Roosendaal, a town on the Dutch-Belgian border.
He has been a soldier, a salesman, a scoutmaster and from 1995 till his school closed in 2012 a teacher of Dutch as a Second Language and Integration to refugees from all over the globe.
Being unemployed and economically overage, yet still some years away from retirement, he is a full-time writer of epic light fantasy adventures. His books are both published in the Netherlands, and internationally.

Olle sat concealed in the shadow of the willow tree, motionless. The stars cast a faint light over the sleeping field and it was quiet, very quiet. His thoughts went to his foster brother, and that murderous creep. Vasthul and the Dar’khamorth – what had Ghyll to do with them?
Some movement caught his eye and he saw a shape creeping towards the tent. A second and third followed. He recognized their jerky movements. Golems! Noiselessly he rose and raised his huge sword. Then he took a deep breath and hurled himself at the three shadows.
‘Ayooo!’
The golems’ reaction was slow enough for Olle to hit one of them full on the forehead. As he turned to the second golem, he saw Ghyll coming from the tent, sword in hand, with Damion close behind. The third golem lashed out at Ghyll, who parried the blow, stumbled and cried out, grabbing his wounded side. The golem raised its weapon for the kill, but at that moment, Damion sprang into action. He jumped the mademan from behind and clung to his back with one arm around its neck, while with the other hand he rammed his poniard into the golem’s forehead. Then he leaped away.
Ghyll tried to avoid the toppling golem, but his leg buckled and he fell. With a roar of despair, Olle turned toward his own opponent and split its head in two all the way to the shoulder blades. As he was about to run to his foster brother, a warning shout stopped him. From their tent, a fireball sizzled into the night. A blinding flash lit up the area, followed by a scream and the clip-clop of a running horse. From the brook rose the deafening croaks of a thousand frogs, protesting the disruption of their sleep.
‘Missed him, damn it!’ Bo’s voice shouted from the renewed darkness.
Olle, blinded, was for a moment disoriented. ‘Ghyll!’
‘It’s... all... right.’ His foster brother’s voice sounded full of pain. ‘I made a wrong move, that’s all.’
Olle resisted an impulse to run to his side and forced himself to inspect the fallen enemies first. After he had ascertained that all three were down for good, he strode back to the tents. ‘How is it?’
Uwella looked up at him. ‘It’s not so bad; his muscles aren’t up to these capers yet. He must be careful of that leg.’
His foster brother said something Olle didn’t hear, but Uwella shook her head.
‘Go back to bed. I’ll give you something for the pain and tomorrow morning we’ll see how it goes.’
Olle turned. ‘Was it... Vasthul?’
‘No idea.’ Bo ran both hands through his long hair. ‘I just saw a shadow in a cloak.’
‘Oh, yes, that was Vasthul all right.’ Damion came back from the direction of the road. ‘I heard him swearing and shouting as he fled. He had the same voice as that guy I chased in Theridaun – a voice like a file, and he wasn’t sparing with it.’
‘I could go after him,’ Uwella said, scowling.
Olle shook his head.
‘Too dangerous.’ He stooped and picked up something. ‘Here,’ he said to Damion. In his hand glistened a white crystal. ‘Keep it, you’ve earned it yourself,’ he said. ‘Idiot!’ He gave his friend a comradely punch in the shoulder and walked away. Moments later, he returned with two golems by the ankles. ‘Does anyone want to see them?’
‘Not me,’ Ghyll said, from inside the tent. ‘Only the crystals, please.’
‘I got two for you. Away with the muddies, then.’ With a casual heave, Olle dumped the makemen one after another into the stream, where they sank, gurgling, to the audible annoyance of the frogs.


‘That’s the end of the show, noble lords and ladies,’ he said as he sat down again under the willow tree. ‘Try to sleep; it’s an early day tomorrow.’ The others went back to bed, but the sounds of their twisting and turning betrayed that further sleep avoided them.
Posted at 11:17 AM No comments: