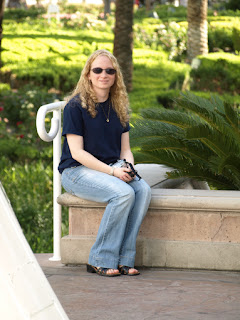 I grew up loving the endless possibilities Fantasy and Sci-Fi held between their pages or played on the big screen. Star Wars, Stephen King, The Neverending Story, vampires, Disney, I loved it all (and still do!) At age ten, I picked up a pencil and began coming up with stories of my own that toyed with other worlds and the mysteries of this one.

My first attempt at writing came at ten years old while, during a sleepover, I tried writing a ghost story. In sixth grade, I entered my school’s writing contest, and in college, my writing professor allowed me to work on a novel instead of following the curriculum.

But at the time, writing was only a hobby I enjoyed. I picked it up, put it down, sometimes for months or years at a time, but I didn’t think of it as a career. Instead, I majored in communications with the goal of a career in journalism. After a couple of years, I changed course and entered the travel industry. Travel had always been another love, especially to Walt Disney World, and the choice seemed the perfect fit. I opened my own travel agency and grew it from the ground up until the Great Recession of 2008 rolled in, along with the blessing of my first child.

With her birth, I left behind the office career and finally admitted what I already knew – I wanted to spend my life creating on paper what played in my head. A series that had already been haunting my dreams for months that I knew would be my first attempt to break into the publishing world.

After releasing romantic suspense under the pen name, RM Alexander, Caitlin Benoit started whispering in my ear and her story started forming. My passion for adventure and travel bled onto the pages as Caitlin was launched into the adventure of a lifetime. But because the story wasn’t focused on romance, I knew I needed a new pen name that would be focused more on UF / Sci-Fi, and Melody Ash was born.

As a complex PTSD and trauma survivor, I often write characters who often face the worse circumstances and must search for their inner strength. It is my hope readers not only connect with the characters and stories but also are encouraged, as they read the last word, that their real-world problems can be overcome.

Outside my writing world, I spend my time with my husband, two children, and Pomsky (who you’ll likely find posted on my social media) in Indiana. I still love to travel and am addicted to orange juice, Ghirardelli chocolate, and adventure.

Thank you for having me! I started writing when I was ten years old at a sleepover with my best friend at the time, and something about it just clicked. I loved writing worlds I could escape to where I had the control to make whatever happen, happen. It was an escape and it was fun. Fast forward twenty years and lots of back and forth with it, I finally decided to take the plunge into making it my career (or actually just realizing it probably always was). So in 2014, I published my first novel under my other pen name, RM Alexander. In 2019, Melody Ash was born and so was the Web of Echoes series.

I am a plotter, although how much depends on the series. Web of Echoes has taken on a whole new dimension of plotting with actual story boards made from construction paper along with two notebooks of outlines, character bibles – it’s been pretty intense. LOL!

Southern Echoes (book 6 in the Web of Echoes series) released in July. I can’t say too much about it without giving away pieces of the storyline , but it’s found Caitlin in a very dark space  with more challenges to fight through.

I’ll have to answer this question for the series. LOL! I’ve always loved adventure stories and tall tales and things like Atlantis and discovering lost civilizations. There’s something romantic and fascinating about it all. And I also love gaming, especially games like Resident Evil and Tomb Raider -games where you really get to explore. So one day I was sitting in my room, after the kiddos went to bed, and had this idea of a character who was really kinda tough and smart and thought she had it all figured out. But what if there was something she still needed to learn? Something that only going back in time could teach her? The story ended up being a little bit Tomb Raider, a little bit Indiana Jones, a little bit Outlander, a little bit Da Vinci Code, and mostly just a whole lot of fun to write.

Caitlin is my favorite because she’s such a strong female lead, even when she’s at her lowest points.

The most difficult thing about writing seems to changes with every project – sometimes it’s a particular scene, sometimes it’s a character that isn’t working out the way I thought they would. It’s always changing.

I’m working on the last two books of this series, and then also have some projects under my other pen name along with projects I’m working on within the new Vella platform.

My biggest advice is that you can’t expect overnight success in this business. It’s a long-haul venture. With that in mind, always keep learning, always keep writing, and find yourself a supportive community – whether that’s one person, five people, or many more – who can cheer you on when it gets tough, root for you when you suffer a setback, and celebrate with you when you win. 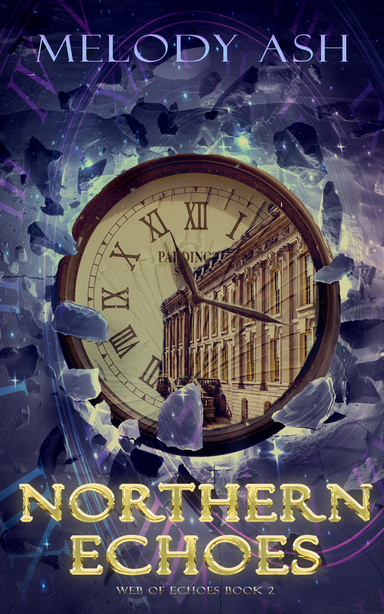 Caitlin Benoit assumed the next destination would be her time, her world. Instead, the stone thrusts her further into the past and onto a different continent.

Now in 1831 England, she’s discovered by William, the Duke of Lancaster. By sheer luck, he’s willing to allow her into his manor. While she fights to gain a footing in this new time, Caitlin discovers the stone also ripped John from Charleston.

Everything she thought she knew about how the stone worked is false, and neither John nor her understand how to escape the grip of the past. As they work to uncover the mystery of the stone, an acquaintance of the Duke plots an intricate scheme certain to destroy them all. She and John must solve the puzzle in an unknown amount of time or risk getting stuck—or buried—in 1831.

Read an Excerpt of Discovery of the Five Senses: The Urban Boys Book 1 by K.N. Smith 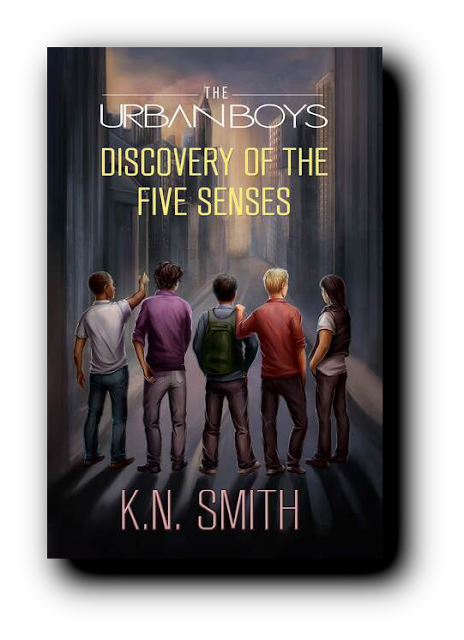 Welcome or unwelcome. Fate has arrived.

“A captivating and poetic tale of mystery, fantasy, and reality tied together by action!” 5-stars, Lars Jackson, Amazon Customer

A suspenseful incident in a forbidden preserve heightens the senses of five friends. Sight, sound, touch, taste, and smell become super-gifts that forever change the world. But furious battles confront the boys as they try to understand their sensory super powers in a race to save mankind. With light beings and mysterious strangers complicating their plight, can the boys defeat the evil Druth before it’s too late? Get prepared for the twisting and grinding of this award-winning, action-adventure story — an edge-of-your-seat narrative for young and mature readers alike.

“Author K.N. Smith uses her mastery of the written word to weave an entrancing, yet powerful tale of adventure that keeps you turning pages in an unquenchable desire to find out what happens next.” – Publishers Daily Reviews

Available for Purchase in Paperback & Kindle at www.books2read.com/knsmith. 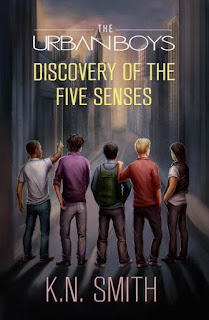 “The others are capable, but they need our help.

Peace will not come easily. We must give them

“Druth will destroy our home. He will hurt the gifted

ones if the nectar finds him.”

“They will not survive him.”

“The others must seek the will for survival. They

must understand their own power.”

A transient suspension held the beings in the

“In these two worlds, our ideas converge, yet

“He must be stopped!”

Now resting upon the succulent, running rich with the

glowing as bright as the sun.

“The one who sees and hears much.” 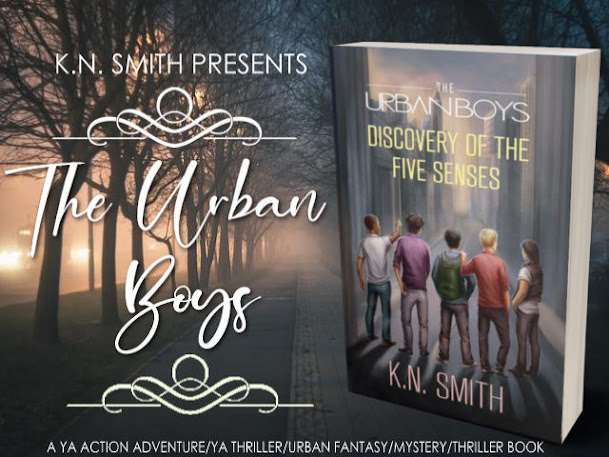 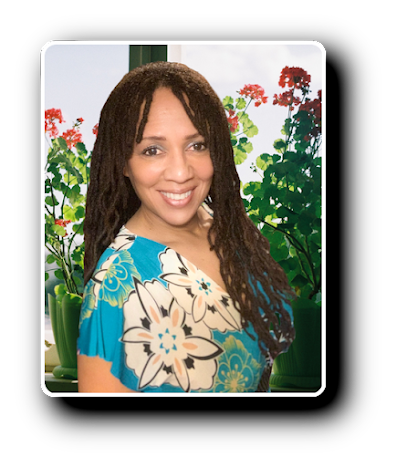 K.N. Smith, winner of the “Best of” in the category of “Outstanding Young Adult Novel” at the Jessie Redmon Fauset Book Awards, is an author and passionate advocate of literacy and arts programs throughout the world. Her lyrical flair sweeps across pages that twist and grind through action-adventure and urban fantasy in edge-of-your-seat narratives. K.N. has over twenty-five years’ experience in communications and creative design as an award-winning consultant. Reading is still her foremost hobby. K.N. inspires people of all ages to reach their highest potential in their creative, educational, and life pursuits.

Her latest book is the YA Action Adventure/YA Thriller/Urban Fantasy/Mystery/Thriller DISCOVERY OF THE FIVE SENSES (The Urban Boys Book 1). 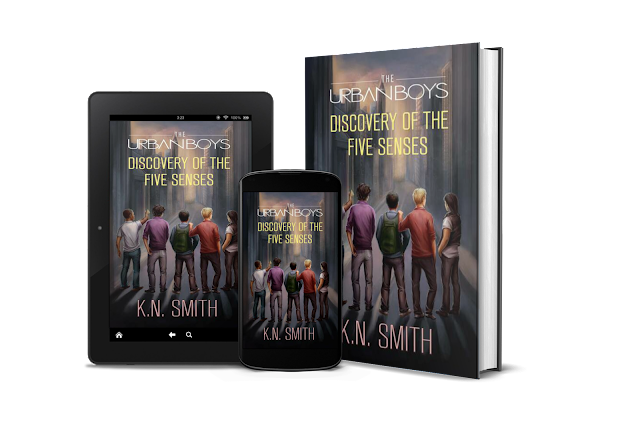