The City Beneath by Melody Johnson Cover Reveal

As a journalist, Cassidy DiRocco thought she had seen every depraved thing New York City’s underbelly had to offer. But while covering what appears to be a vicious animal attack, she finds herself drawn into a world she never knew existed. Her exposé makes her the target of the handsome yet brutal Dominic Lysander, the Master Vampire of New York City, who has no problem silencing her to keep his coven's secrets safe… But Dominic offers Cassidy another option: ally. He reveals she is a night blood, a being with powers of her own, including the ability to become a vampire. As the body count escalates, Cassidy is caught in the middle of a vampire rebellion. Dominic insists she can help him stop the coming war, but wary of his intentions, Cassidy enlists the help of the charming Ian Walker, a fellow night blood. As the battle between vampires takes over the city, Cassidy will have to tap into her newfound powers and decide where to place her trust...

Melody Johnson is the author of the Night Blood series. She graduated magna cum laude from Lycoming College with her B.A. in creative writing and psychology. While still earning her degree, she worked as an editing intern for Wahida Clark Presents Publishing. She was a copyeditor for several novels, including Cheetah by Missy Jackson; Trust No Man II by Cash; and Karma with a Vengeance by Tash Hawthorne. Book #1 of the Night Blood series, The City Beneath, is her debut novel. When she isn't writing, Melody can be found hiking the many woodsy trails in her Pennsylvania hometown or sunning and swimming at the beach. You can learn more about Melody and her work at elodymay.blog.com, Facebook and Twitter.

Hope for a Better World by Monique Mitchell Book Feature 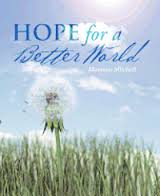 The book is basically my memoir; however, there are some fictitious characters but all is based on real events.

Flashback to my childhood in Madagascar: country with a fascinating history and a unique population, with ethnic characteristics in my own family.

Recollecting past personal tragedies in childhood and situating myself in the present where loving people( my family and church friends) are surrounding me, motivating me to be a good person and see life in a happy perspective. In particular, feeling as a great privilege to be part of the melting pot in the USA.

Recollection of the life at the Faculty of Medicine (Angers), France and the following years in Paris, graduating in social studies. Identifying the influence of the French culture as a pivotal factor in my life and grateful to Bon Papa (grandfather)who, by becoming a naturalized French citizen enabled his descendants to benefit from their French education, while identifying their difference and /or alienation, could also choose individually, how to find a balance between a dual culture they were./are exposed to (their own native and the acquired one).

An interesting trip to the Champagne region through the wine road and to the east of France (Alsace), rich in war (WWI) memories. And there also, exhilarating history about the Statute of Liberty: designed and constructed (before being brought to the USA) by the French architect, Frédéric August Bartholdi.

Marriage to an American business man and birth of son in 1965 but early on, had to raise her child as a single mother due insurmountable challenges in the marriage.

Worked for 20 years for the UN in 9 countries in Africa and Asia, all called hardship posts, including those for peace-keeping missions located in politically challenged and/or war-torn countries. For each country, there is a description, besides my administrative work, of history, culture, population etc…

Farewell trip to Madagascar visiting the tomb of my grand parents with great sadness, fond memories and gratefulness for having raised me as a Christian child with the moral values I still carry with me at this day. Joining my American family on a permanent basis to be with my beloved son.

Birth of granddaughter, Jade, who is now a teenager and praying for all members of my family to be blessed by God in the country where I am now conveying my message for love and tolerance in my book “Hope For a Better Work”. 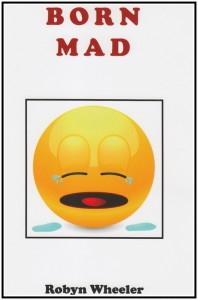 Follow Robyn on her journey from fits of rage as an angry child, blunders and setbacks as an adult in deep denial, to her quest for awareness and enlightenment. Robyn takes you inside her deepest thoughts and fears, as well as her chronic anger and thoughts of suicide. After being diagnosed with a “bad state of mind” called dysthymia, Robyn wrote Born Mad to help others who may be unaware that they might be suffering from a low-grade chronic depression that will make l ife difficult, ruin relationships, and contribute to a negative and hopeless outlook on life. Born Mad includes symptoms of dysthymia and copies strategies, as well as the story of how Robyn came to believe in God, defeat chronic anger, and become the person she was meant to be. Read about her courage and determination to be happy and how her life has changed after having a “brain transplant.” If you or someone you know suffers from constant mood swings, angry thoughts, and extreme worry or anxiety, Born Mad might shed light on the reasons why and how to fight your way through to hope, peace and happiness.

Robyn Wheeler felt her childhood was full of anger.  Not anger directly because of outside influences; in fact, she said she had a happy childhood.  It was an anger within.  It was as if she had no control over it and it eventually had a name – dysthmia.  To back up, she recollects there were times she was the brunt of many practical jokes and later hearing her parents argue.  The parents ended up splitting up but she says she was happy it happened because it was better than hearing screaming all the time.  “As a child of divorce,” she says, “I much preferred shuttling back and forth between two houses than listening ot the bickering.  If two adults can’t get along, it isn’t healthy for their kids to witness this.”

She later tells us that because of all the bickering, it affected her throughout her own marriage and it went on for many many years.  Throughout her adult life, she found herself cowering when someone yelled at her.  People would tell her she had a bad attitude and that no one enjoyed being around her.  I mean think about it, would you want to be around someone who was negative all the time or someone who smiled and laughed and made you feel good to be around them?  “I often wonder why I had any friends,” she wrote.  “I couldn’t have been fun to be around.  I wasn’t someone I wanted to be around, so how could I expect others to want to be around me?”

Robyn goes on to tell us about different instances in her life which included childhood tantrums and adult denial.  She didn’t see what others saw nor did she care what they thought.  Her intentions on telling us this back story was in the hopes of helping others who may be behaving in a similar way and have no idea why.  Born Mad was written for those who feel angry all the time and have no reason why nor do they have any idea on how to snap out of it.

I chose this book to review mainly because I do have someone in my life who is constantly not happy with the world and I wondered if, after reading Robyn’s story, I would come away with some hope that this person might get some help.  I will definitely be passing this book down to him/her.
I will say that after finishing the book, I came away with a new knowledge of a disease that could happen to anyone.  If you know someone who is habitually angry all the time, you’ve definitely got to check out Born Mad by Robyn Wheeler.  Read her story of how she beat the demons that were plaguing her whole being and became the person she truly wanted to be.
Posted at 12:00 AM No comments:

Nothing gives Anna and Felty Helmuth greater satisfaction than seeing their grandchildren happily married--except for planning their next matchmaking venture. And as springtime comes to Huckleberry Hill, Wisconsin, the air is filled with promise. . .

Ever since the Helmuths' grandson, Ben, abruptly broke his engagement and moved to Florida, Emma Nelson has kept busy tending her vegetable garden and raising award-winning pumpkins. She can put her heartache aside to help Ben's Mammi with her own pumpkin patch. At least until Ben shows up to lend support to his ailing Dawdi. . .

Gardening side by side with pretty, nurturing Emma is a sweet kind of torture for Ben. She could have her pick of suitors who can offer what he can't, and he cares too much to burden her with his secret. Leaving once more is the only option. Yet Emma's courage is daring him to accept the grace that flourishes here, and the love that has been calling him back to Huckleberry Hill. . .

"A delightful cast of characters in a story that overflows with Amish love and laughter." --Charlotte Hubbard

"A warm romance with two likable main characters and ultimately a great ending for all." --Parkersburg News & Sentinel

I grew up with a steady diet of William Shakespeare and Jane Austen. After all that literary immersion, I naturally decided to get a degree in mathematics, which came in handy when one of my six children needed help with homework. After my fourth daughter was born, I started writing. By juggling diaper changes, soccer games, music lessons, laundry, and two more children, I finished my first manuscript—a Western—in just under fourteen years.

I have always been fascinated by the Amish way of life and now write Inspirational Amish Romance. I am drawn to the strong faith of the Plain people and admire the importance they put on enduring family ties. I have visited and studied Amish communities in Pennsylvania and Wisconsin where I met with a bishop and a minister as well as several Amish mamms, dats, and children. It has always impressed me at what salt-of-the-earth people they are. My interactions with these kind people have been some of the most rewarding experiences of my life. I have a dear Amish friend with whom I correspond in Lancaster County, Pennsylvania. She helps me keep my facts straight and gives me inspiration for my stories.

My goal is to write uplifting, inspiring stories with happy endings and hopeful messages. If my books make readers want to give themselves a big hug or jump up and down for joy, I’ve done my job. I am a member of Romance Writers of America and American Christian Fiction Writers and am represented by Mary Sue Seymour of The Seymour Agency.

There are three Amish romances in the Forever After in Apple Lake Series (Summerside/Guideposts). Kate’s Song, Rebecca’s Rose, and Miriam’s Quilt are all now available.

I have six Amish Roamish buggymances in the works with Kensington Books. The first and second books, Huckleberry Hill and Huckleberry Summer, are now available in stores and online. The Matchmakers of Huckleberry Hill is set in northern Wisconsin Amish country.

The series, The Matchmakers of Huckleberry Hill, is about an elderly Amish couple who try to find suitable mates for their grandchildren. What could be more fun than throwing two young people together to see if sparks ignite? No one would ever suspect two octogenarian Amish folks of mischief.

I have four daughters, two sons, three sons-in-law, and two adorable grandsons. I live in the foothills of the Wasatch Front with my husband and one son still left at home.